How I found and lost Fluffie in San Antonio 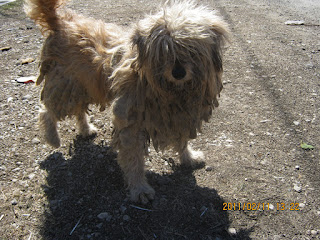 This is Fluffie, a dog from the Westside that I've been trying to catch for a year.  He's a mustang-poodle.  I've tried dog traps from the Animal Defense League, dozens of weinies, and almost illegal drugs.  Nothing worked.  He's a sweet dog, but afraid of people.  Two days ago he finally got trapped in a yard on Colorado Street, and Mike, a man who was my lookout called me and I went right over the next morning.  He was already on Death Row, curled up in a corner.  I paid to get him fixed, his shots, microchipped, the works.  I went yesterday to get him, ready with weinies, a training leash, a collar and leash.  He's a Maltese Poodle, apparently, but who knew?  Weighs about 15 pounds, so the dreadlocks weighed more than him. I told the woman in the Clinic to please make the collar tight so that he wouldn't get away, told her he was a wild one.  She told me that no way could he get away from the collar, though it wasn't as snug as I would have liked, but these are the people who work with dogs, and maybe they know something?  I walked out slowly with the Fluffie and he dragged, then walked some, let me pet him a little, let me carry him a little before he made signs he wanted to bite me, got back on the ground, then dragged and started wrestling with the leash.  A guy came out to help me, and we walked to the car where I opened the back, and by this time because Fluffie was wiggling like the little maniac he is, slipped out of the collar that was supposed to be "tight" and got away.  Went under the van, and the guy called for help from ACS but no one came.  Then Fluffie was about to take off to the freeway, but the guy did some kind of football defense-move, and cut him off.  Fluffie ran off to the dried grass between the ACS and the Food Bank.  Finally the ACS truck came and they told me they would find him for sure and call me.  Of course they haven't.  The really sad thing in all this is that they are blaming me.  They get paid to save dogs, and some of us just do it because who could resist el Fluffie?  If they only knew how hard I tried.  Now he's buck-naked  and furless out there, I hope someone can trap him and save him.  He's a good little dog, with some weinies and patience, he can make it.  He's two years old according to my ACS papers.  They say he could've been abused in the past, and that's why he's so skittish around people.

Popular posts from this blog

May 03, 2017
Today is Tuesday, May 3rd, and so much has happened.  A brain tumor.  More yoga and walking.  A little less combat.  Weight dropping.  Spirit rising.  Back in the city, where I belong.  Looking for good photos to give you, organizing my crazy files.

And a new President!  So much to say, more than beating up on him -- that will only take us so far.  Time to hit the streets, challenge the fears that he represents.  Don't be afraid, no tengan miedo.  If I survived a massive brain tumor -- big as a grapefruit -- we can survive and transcend this.

More tomorrow.  One day a week from now on.
3 comments
Read more

August 10, 2009
Longleaf pines are native to the southeast United States, and their conservation status is vulnerable. Only three percent of this historic, unrottable pine tree forest that can live up to 500 years remains. With long leaf pine (no smack gum) by the comeback sensations, The Krayolas, it is clear they intend to make great music for the long haul. I’m talking about one song in particular, “Twelve Heads in a Bag,” a deceptive rock-ballad (written and sung by Hector Saldana, with Max Baca on bajo sexto and Michael Guerra on accordion). Twelve Heads… is dedicated to the beheaded victims of Mexico’s drug wars. As has been said before but needs to be said again, it is the first corrido of the 21st century and it’s for the history books. Twelve Heads in a Bag makes you want to dance with a Lone Star in your hand, no matter the barbeque stains on your Tshirt, wondering why it wasn’t you in that bag.
45 comments
Read more

A battered woman from San Antonio loses her reporting job

August 02, 2007
Gina Galaviz, 43, KSAT-TV's I-love-the-police reporter, "has been fired" from the television station , according to the San Antonio Express-News, and I'm quoting verbatim here from Jeanne Jakle's byline, "after she was charged with assault following a fight with her boyfriend," Ronald Aguillen, 46.

Ok, so we in San Antonio know about the time in 2004 when Gina filed charges against another boyfriend, the former SWAT cop, who was a councilman at-the-time, Ron Segovia .
There were allegations of an apple being thrown at her nalgas, which humiliated her, and that he also pointed a gun at her. It was not the first time, she told me.

Tough-guy Segovia got off - I think he had three attorneys representing him if I remember correctly, and in this city, like too many, the cops are in bed with the grand jury - they need and depend on each other, and this grand jury decided there "wasn't enough evidence to pursue a criminal case against him."

Barbara Renaud Gonzalez
San Antonio, Texas, United States
I am a writer, who has nothing but a pen, books and cats, a dangerous combination. My novel, Golondrina, why did you leave me? is the first Chicana novel to be published by the University of Texas Press, Chicana Matters, April 2009. First Fiction Finalist, Texas Institute of Letters, March 2010. I've just finished the first children's book about voting rights pioneer Willie Velasquez,"The boy made of lightning," I'm also writing a Tex-Mex fairy tale, "Adivina," for which I received a literature grant from the Artist Foundation of San Antonio in 2006. My collection of my most notorious columns, "Las Nalgas de JLo/Jlo's Booty," has just been published by Aztlan Libre Press, 2017. My essays/articles have appeared in diverse anthologies and magazines, including The Nation; The Progressive; Ms. Magazine; The Los Angeles Times, and many others. My commentaries have aired on NPR's Morning Edition and LatinoUSA. In 2000, I received the Inter-American Press Association Opinion prize in Santiago de Chile.